Here is my list of new gTLDs applied for by Australian companies, Universities and governments.  There were a number of Victorian Universities who applied, plus the NSW Government and the Victorian Government.  Commonwealth Bank made three applications, as did iSelect.  A number will be contested (as marked in bold) below.

There were two applications from New Zealand, KIWI and RIP.

Amazon made over 70 applications for words in English, and a bunch more in non-Roman text.  Google made about 100 applications, under the name Charleston Road Registry Inc..  Facebook did not make any applications.
at June 13, 2012 No comments:
Email ThisBlogThis!Share to TwitterShare to FacebookShare to Pinterest
Labels: amazon, domain names, facebook, google, gTLD 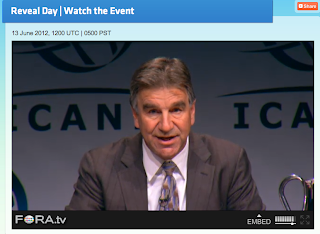 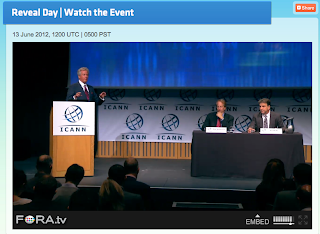 at June 13, 2012 No comments:
Email ThisBlogThis!Share to TwitterShare to FacebookShare to Pinterest
Labels: ICANN, Reveal Day

It is anticipated that 1,900 applications have been made for new gTLDs.  Information will be posted here tomorrow.

For background about the gTLD process and new gTLDs, see: B and T; and Mallesons.

Save on shoes, accessories, handbags and apparel at Shoebuy.com. We've got something for everyone and for a limited time, you can save $10 on that special something. Valid on purchase of $50 or more.
View >>
at June 09, 2012 No comments:
Email ThisBlogThis!Share to TwitterShare to FacebookShare to Pinterest

Kim Dotcom on the offensive


Papers state the FBI allegations "turn a blind eye to laws ... that provide a safe harbour" for businesses which work to remove any material which infringes copyright. It stated there was no law which allowed cloud storage companies to face criminal charges over the actions of users.

Does MegaUpload have a DMCA defence?
at June 01, 2012 No comments:
Email ThisBlogThis!Share to TwitterShare to FacebookShare to Pinterest
Labels: DMCA, dotcom
Newer Posts Older Posts Home
Subscribe to: Posts (Atom)

Swiss Hacktivist was raided at the request of U.S. authorities for data theft and then publishing what was hacked. https://amp.9news.com.au/...