The Federal Court of Australia has decided that a person who published allegedly defamatory tweets on Twitter does not receive the benefit of the journalists' privilege under the Evidence Act.

See this helpful note from Clayton Utz.  Also Bennett & Co.  Story in the AFR and The Age.

May The Fourth Be With Disney

When Disney asked “Star Wars” fans to share their favorite memories of the franchise using the hashtag #MayThe4th, it said responses would fall under its terms of use agreement. Social media users were scathing. 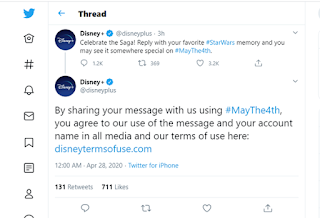 at May 04, 2020 No comments:
Email ThisBlogThis!Share to TwitterShare to FacebookShare to Pinterest
Labels: acceptance, disney, hashtag, online contracting, twitter


A case in NSW requiring Twitter to remove posts on a worldwide basis that contained confidential information.

Twitter is being sued for defamation by a Melbourne man, Joshua Meggitt, who was wrongly identified as the author of a “hate blog”.
See story here and SMH.
at February 18, 2012 No comments:
Email ThisBlogThis!Share to TwitterShare to FacebookShare to Pinterest
Labels: content regulation, defamation, hate speech, third party conduct, twitter

SAN FRANCISCO — What began as seamy gossip about an affair between a famous British soccer player and a reality TV star has quickly become another test over how far the rights to privacy and free speech extend online, where social media operate in countries with vastly different laws.

The soccer player has been granted a so-called super-injunction, a stringent and controversial British legal measure that prevents media outlets from identifying him, reporting on the story or even from revealing the existence of the court order itself.

But tens of thousands of Internet users have flouted the injunction by revealing his name on Twitter, Facebook and online soccer forums, sites that blur the definition of the press and are virtually impossible to police.

Last week, amid growing outrage in Britain over the use of super-injunctions, the athlete obtained a court order in British High Court demanding that Twitter reveal the identities of the anonymous users who had posted the messages. A Twitter spokesman, Matt Graves, said the company could not comment on the court order or how it planned to respond.

Eric Goldman, director of the High Tech Law Institute at Santa Clara University, said, “It’s really going to the core of Twitter’s service and trying to balance the speech of its users and the fact that countries have different laws and norms about speech.”

In responding to the judgment, ACCC chairman Graeme Samuel said: "Many corporations now use Facebook "Fan" pages and Twitter accounts to promote their businesses. This outcome confirms that any business that decides to leave public testimonials or other comments on their Facebook and Twitter pages will be held responsible if they are false, misleading or deceptive."

The Law Firm of the Future

ACCC to Review Facebook, Google and other large digital platforms

The ACCC is seeking views from consumers, businesses and other parties on options for legislative reform to address concerns about the domin...