This is the iCyte service that I mentioned in class.
Here is a project that I have created using iCyte.
at February 27, 2010 No comments:
Email ThisBlogThis!Share to TwitterShare to FacebookShare to Pinterest
Labels: icyte, research

This is the course website:
cyberspac.com
Peter Black, who co-taught this subject last year, has this blog. http://freedomtodiffer.com/ He has become a famous Twit.
at February 27, 2010 No comments:
Email ThisBlogThis!Share to TwitterShare to FacebookShare to Pinterest
Labels: cyberlaw, cyberspace law and policy, peter black

From JL:
See Brisbane Times article
It is interesting to note that once again Google has reached for the freedom of speech lever as the apparent universal panacea absolving itself of any and all responsibility for breaches of privacy.
I for one would have though that, as an American company, Google would have been well-versed in the notion that freedom of speech is only 'free' to the extent that it does not impose on, contravene or breach another person's legal rights.
If tertiary institutions have the capability of analysing work submitted by students for plagiarism through the use of algorithm programs, then surely the technical boffins at Google can devise some process whereby material submitted for posting to the web can be assessed.
In this particular case, it is difficult to embrace the Google's Code of Conduct "Don't do evil" as being anything other than a marketing slogan. For mine, aiding and abetting the doing of evil equates to the same thing. If Google is serious about corporate social responsibility, then I suggest it not just talk about it, but in the words of another multinational "Just do it!"
See also NY Times
at February 25, 2010 1 comment:
Email ThisBlogThis!Share to TwitterShare to FacebookShare to Pinterest
Labels: google, privacy

Brisbane Magistrate Noel Nunan this morning varied bail conditions for Philip Heggie, 18, so he could use the internet to continue his university studies.

Heggie, a University of Queensland business student, made a brief appearance in the Brisbane Magistrate's Court to answer charges of fraud, attempted fraud and uttering a forged document.

--- A class member asks the following regarding the above story:

Given the level of sophistication required to perpetrate these alleged activities, has the Court (in its most recent decision concerning bail conditions) paid sufficient heed to the possibility of the accused undertaking similar acts? How meaningful are either of the different sets of bail conditions prescribed by the court, given that cyber crimes can be undertaken anonymously?

Are these sites legitimate, or not?

www.ecyberspac.com
www.hastingsstreethotel.com
www.noosa-apartment.com
What is the purpose of these websites?
at February 22, 2010 1 comment:
Email ThisBlogThis!Share to TwitterShare to FacebookShare to Pinterest

These are my notes for class for 1 March 2010. The class is "The law of Google". Have a look at these websites (and if you have a Google account, log in to that account first):

1. The breadth of Google.

A. Do these searches on Google, Australian Googleand UK Google and compare results:
Have a look at the two Google search interfaces on this page (http://www.cyberspac.com/Cyber_Law_and_Policy/Search.html) and do the same searches on both and compare the results.
B. AdSense

Look at the Google Ads on these websites:
More information on Adsense

Look at these websites:
(What is legitimate? See RealSpanking and Jackassand UStream)

(b) Click Fraud
What percentage of click are fraudulent? See this story and here too.
Clickfraud is old news: Crack-down

Welcome to LWN117 Cyber Law and Policy in Semester 1, 2010 at QUT.
This unit is offered in internal mode, commencing Monday 22 February 2010 at 6pm.
The Venue is: GP:B506
at February 21, 2010 No comments:
Email ThisBlogThis!Share to TwitterShare to FacebookShare to Pinterest

Google moved quickly to contain a firestorm of criticism over Buzz, its new social network, taking the unusual step of announcing changes to the product over the weekend to address privacy problems.

Late Saturday, Todd Jackson, product manager for Gmail and Google Buzz, wrote in a blog post that Google had decided to alter one of the most vehemently criticized features in Buzz: the ready-made circle of friends that Buzz gives new users based on their most frequent e-mail and chat contacts. Now, instead of automatically connecting people, Buzz merely suggests to new users a group of people that they may want to follow or want to be followed by. ....

SAN FRANCISCO — When Google introduced Buzz — its answer to Facebook and Twitter — it hoped to get the service off to a fast start. New users of Buzz, which was added to Gmail on Tuesday, found themselves with a ready-made network of friends automatically selected by the company based on the people that each user communicated with most frequently through Google’s e-mail and chat services. 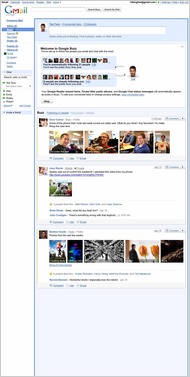 Google's decision to use e-mail and chat as the basis of a social network was unfair and deceptive, some critics claimed.

But what Google viewed as an obvious shortcut stirred up a beehive of angry critics. Many users bristled at what they considered an invasion of privacy, and they faulted the company for failing to ask permission before sharing a person’s Buzz contacts with a broad audience. For the last three days, Google has faced a firestorm of criticism on blogs and Web sites, and it has already been forced to alter some features of the service.

The iiNet copyright case was decided this week. It concerns the copyright liability of an Internet service provider (ISP) for the conduct of its customers.
Background: www.iinet.net.au/copyrightcase
Case note.
Judgment.
at February 06, 2010 1 comment:
Email ThisBlogThis!Share to TwitterShare to FacebookShare to Pinterest
Labels: copyright., ISP

From The New York Times:

In Europe, Challenges for Google

On issues like privacy, copyright protection and the dominance of its search engine, Google is increasingly clashing with lawmakers and regulators.

The decision today of the Full Court in Commissioner of Patents v Rokt  further clarifies the position in relation to whether a computer im...